Uncertainty of the price of oil, the field has become very competitive. Technologies established over several decades have to be re-evaluated for making the production economical, environment friendly & safe operation.

It’s the beginning of Cold process of manufacturing Sulphuric acid.

This paper will highlight positives and negatives of the prevalent manufacturing facilities of liquid sulphur di-oxide. 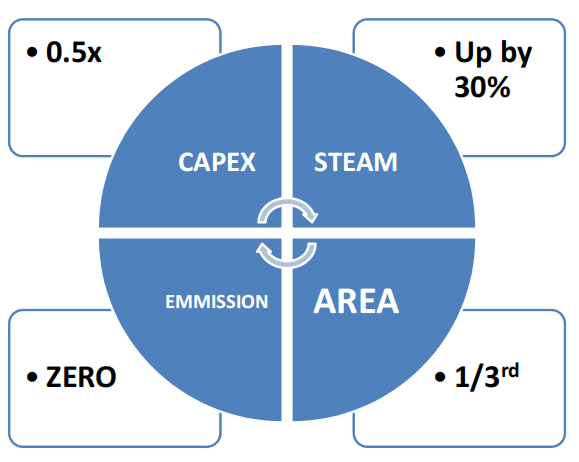 Sulphur di-oxide known for its disinfecting and bleaching quality. Since late early 20th century, it has been used for Industrial refrigeration plants; widely used for producing quality paper by preparing Sulphite pulp; quality pulp produced is taken as a raw material for producing viscose rayon.
Lately Sulphur di-oxide has become a major component in petroleum refining and sulphonation reactions..

Since twentieth century Sulphur di-oxide has been manufactured at industrial scale.
The advent of contact process in the thirties opened the door for new techniques to produce pure Sulphur di-oxide.
In the late eighties, due to environmental considerations Sulphur recovery from crude oil and flue gas cleaning from combustion of Sulphureous fossil fuels added to the SO2 recovery systems.
Following are the main sources of Sulphur dioxide production:
1. Elemental Sulphur
2. Pyrite
3. Sulphide ores of non-ferrous metals
4. Waste Sulphuric acid and Sulphates
5. Gypsum and anhydrite
6. Hydrogen Sulphide-containing waste gases
7. Flue gases from combustion of Sulpherous fossil fuels
8. *Destructive combustion of gypsum and other waste Sulphiric acid containing inorganic or organic salts.

* NEAT has given consultancy services for 200 TPD Sulphuric Acid Plant in Zelzate, Ghent, Belgium. all the plants in Europe manufacturing Dyes, Intermediates, Drugs and other Sulphonated products used this plant for ther waste disposal. This was in 2004-2005 when the plant was to be bought by M/s Madhvani Group of Kenya. NEAT had done the due diligence of the plant and suggested improvements in the operation of the plant.


I. Production From Burning Sulphur By Partial Refrigeration Of Sulphuric Acid Plant Gases

This process was used by Welmen Lord (USA), Albright and Wilson (UK) and Lurgi (Germany).
This process requires high capital cost and high utility cost for refrigeration.
Due to it being uneconomical, no more industrial units produce liquid Sulphur di-oxide by this process.


II. Production By Burning Sulphur Cooling, Absorption In Alkali And Desorption, Drying By Sulphuric Acid, Compression And Condensation By Refrigeration

In the late fifties, it was used by plants dedicated totally to produce liquid Sulphur dioxide.
Apart from high cost of the plant, this process required special materials of construction like Hastelloy C due to heavy corrosion.
However, for the production of alkali sulphites and bisulphites, this process is still in operation in certain plants. This process is still in use for production of Sulphur di-oxide in Canada for metallurgical plants.
Due to high capital cost as well as maintenance cost, this process is now being replaced by direct reaction of liquid Sulphur with liquid SO3 as described later in the paper.


III. Production By Use Of Organic Solvent From By Product SO2 Generated in Specific Chemical Reactions

Sulphur di-oxide is produced as a by-product in the manufacture of petroleum additives, Thionyl chloride, continuous detergent manufacture, etc.
Sulphur dioxide dissolved readily in most orgnaic liquids such as methanol, ethanol, benzene, acetone and carbon tetrachloride.
Sulphur dioxide is completely miscible even at low temperature with ether, carbon di sulphite, chloroform and glycol.
The byproduct Sulphur dioxide is absorbed in any of the solvents and then released as pure Sulhur dioxide recycling the solvents for absorption.
Depending on pressure at which liquid SO2 is released from the solvent, the condensation takes place as per Graph I. 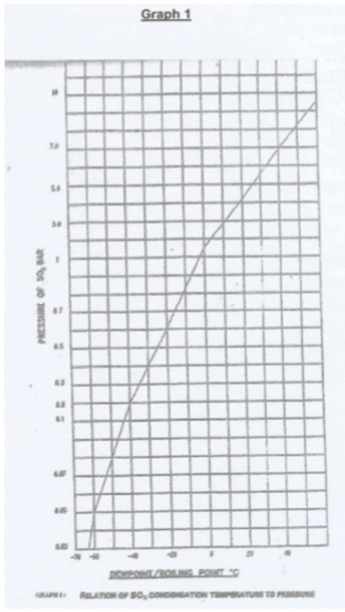 It can be observed that if the pressure of desorption tower is maintained between 7 – 10 kg/cm2, no refrigeration will be required.
Large quantities of liquid SO2 are produced by this process as by product.

IV. Production By Use Of Concentrated Oleum (65%) and Solid Sulphur Using Compression And Refrigeration (Batch Process)

This process is a batch process which was adopted for the production of small quantities of liquid SO2.
Process: Solid Sulphur is charged in a reactor fitted with agitator and cooling jacket, concentrated Oleum is introduced in stoichiometric proportion to produce concentrated Sulphur di-oxide (97.5%) and free SO3 (2.5%).
The gases are led to Sulphuric acid tower to remove unreacted Sulphur tri oxide after passing through demister the pure SO2 is compressed and chilled to give the final product.
This process is still used in India in some of existing manufacturing units.
However, the cost of production being high these are being replaced by latest technique of producing liquid Sulphur dioxide using molten Sulphur and liquid SO2.


V. Production By Using Molten Sulphur And Liquid SO3 Under Pressure Without Compression And Refrigeration (Adopted By NEAT)

This process is described in detail by the author in the paper presented at British Sulphur conference in 1999 at Calgary, Alberta and, shall also be presented at International Conference organized by Süd-Chemie in Sep 2016 at New Delhi, India.
- Paper title: 'Liquid Sulphur Dioxide without Compression or Refrigeration'
Currently in India, more than 24,000 TPA of Liquid SO2 is being produced by the 'NEAT' process.
Currently, 4,000 TPA of Liquid SO2 plant is being built in Kingdom of Saudi Arabia based on 'NEAT' process.
As regards the economics for the various plants, it is described in the next section.

Manufacture of Liquid SO2 has gone into a radical change to reduce raw material and utility costs.
Comparative production pattern indicates the closing down of Liquid SO2 plants which were uneconomical and growth of plant capacity using direct process of reacting under pressure liquid Sulphur and Liquid SO3 under stoichiometric proportion by the reaction.
S + 2 SO3 = 3 SO2 | ∆H = -99 KJ mole 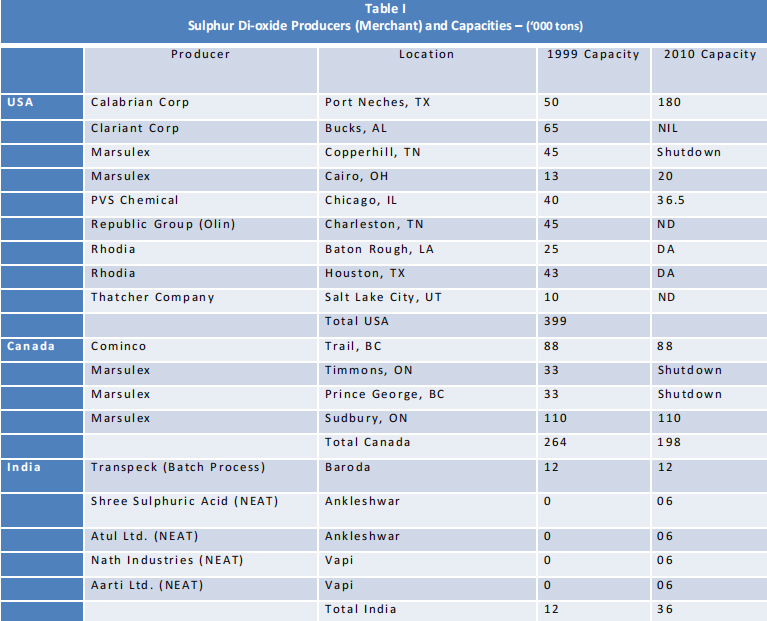 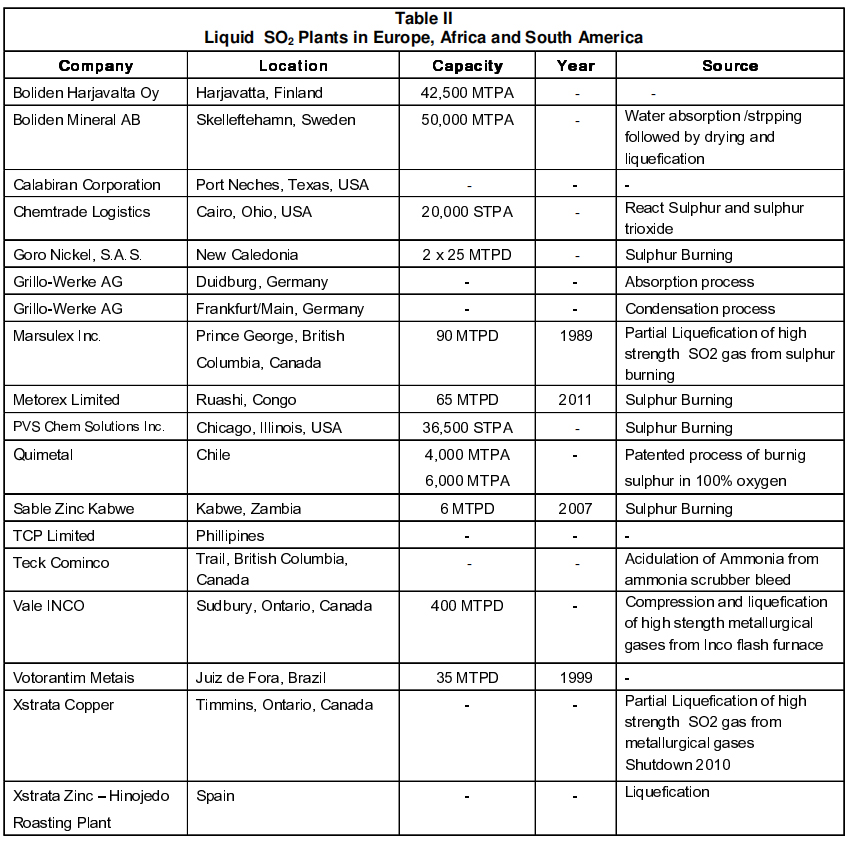 Key metrics and USP's of the 'NEAT' Process

As regards raw material and utility consumption by the process adopted by NEAT, the following are guaranteed figures per tonne of Liquid SO2.
1. Liquid SO3: 0.841 MT
2. Liquid Sulphur: 0.175 MT
3. Power: 30 kWH
4. Water (for cooling): 1.5 M3
5. Steam (low pressure): 0.3 MT
Sulphur efficiency is higher than 98%.
Raw material, equivalent sulphur required is 40% of 0.841 = 0.3364 plus 0.175 i.e.
0.511. Part of Purged SO2 / SO3 is returned to Sulphuric acid plant.
Cap-ex is low as the MOC is M.S.
Op-ex is lower due to lack of compression or refrigeration requirements.
Lastly, the process is more Safe & Environment friendly.
Any other process currently in practice is requiring higher utility costs.

A case made here to present comparative study for the manufacture of liquid sulphur Dioxide.
It is demonstrated that direct process of liquid SO3 with liquid sulphur will be most attractive for future plants.
However, recovery plants of byproduct SO2 will also be an attractive economic proposition.